‘Migrants, #MeToo, and Melting Icecaps… Redefining Banking for a Radically Different Future’ – insights from the #GABVsummit 2019

On February 19 and 20, Vancouver hosted the Global Alliance for Banking on Values Summit 2019. Co-organised by the GABV and its member Vancity, the event brought together banking and financial leaders and experts from around the world to discuss the present and future of the values-based banking movement. Conversations covered some of the most relevant topics of today’s reality, including immigration and refugees, gender equality and women empowerment, and climate change.

If you want to see what we did in Vancouver, here’s the video from the Summit:

As we want the conversations to continue, we invite you to watch the videos about the topics discussed during the Summit and use them to start the conversation within your local communities:

Money has no borders, but countries do. As long as there are borders, we are faced with questions of social inclusion, and money plays an important part in that. In the best of times, banks and other financial institutions find it challenging to get money into the hands of people working in the informal economy or people without addresses. GABV banks across the world have been unique in their ability to respond to these challenges. Whether people working in the market in Arequipa or newly arrived immigrants in Minneapolis, the GABV banks have found creative ways to make banking accessible to migrants and refugees. But more needs to be done to influence governments, encourage civil society, and shift the values of the financial sector to meet the needs of this growing number of people in the short and long term.

New York civil rights activist Tarana Burke first coined the phrase Me Too in 2006 to begin a movement that gained global traction in 2017 when the hashtag #MeToo united victims of sexual abuse, harassment and assault in a discussion of dignity, accountability, power and, ultimately, healing. The movement continued over the past year with public revelations of misconduct in the highest ranks of power in the entertainment, corporate, and political worlds. It has since opened wider explorations on how diversity can transform the social and power dynamics within communities, workplaces and institutions.

Taking gender diversity and social inclusion seriously in the financial system will mean rethinking basic assumptions about social class, income distribution, wealth dispersion and the focus of economic decision-making. GABV member banks have a strong track record of using impact investing and microcredit lending to bring marginalised actors into the financial system and small business financing and mobile banking is working to reinforce social and gender inclusion. How can the financial system take new initiatives to overcome biases and social injustices that still persist?

Environmental challenges and climate change are the underlying conditions and indirect cause of everything we have been talking about at the Summit thus far. Values-based banks have played a fundamental role in the early awareness of and investments in support of the energy transition. All indications suggest that a massive investment push will be needed to meet the goals of the Paris Accord and provide new pathways to sustain life on Earth. We have reached a massive turning point where a range of institutional actors have stepped in yet there still needs to be a wide spectrum of investments to translate years of promises into urgent action.

If you want to learn more about what has been discussed during the Summit, we invite you to watch a summary video here:

See the photos from the Summit: 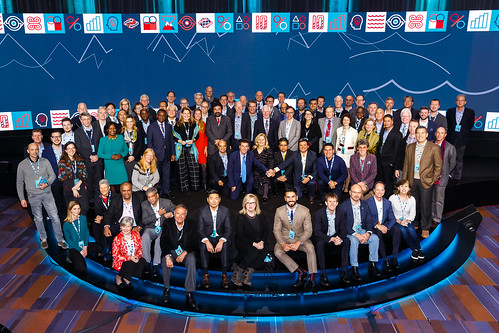 Summit visuals can be accessed here